Skip to content
HomeGoing sideways – looking at siblings for clues

I have posted many times about my biggest genealogy brick wall – identifying my fourth great grandparents on my McTavish side.  One of the ways that I have been trying to break this down is through DNA.  I have my DNA posted on many sites and I review matches regularly to see if there is anyone new that might have the one clue that will help me.  I have been trying to triangulate the DNA information that I find and look specifically at those shared matches that my matches have – trying to create a cluster.  And if my matches share a match with another McTavish, I tend to get quite excited.  Late in 2019, I found one such match and luckily, she had a small tree posted on Ancestry.  Her tree went back to a Hugh R. McTavish who died in Edmonton in 1958.  I jumped right in to try and understand who this Hugh was – he was not in my vast tree, nor on any of my spreadsheets.

The first thing that I found was an obituary for Hugh Robert McTavish printed in the Edmonton Journal on June 13, 1958.  First thing to note, was that he was 83 years old, meaning that he was born about 1875.  He had moved to Namao, Alberta with his parents in 1895 and he farmed with them until 1901 when he joined the Railway.  He was a stationary Engineer who resided in Edmonton since 1905 and was married to Margaret Johanna Connell.  Together, they were parents to six children, three daughters and three sons, one of whom had pre-deceased his father.  Great information to start!

Searching further on Ancestry, I was able to find the Alberta marriage index, which gave a date for his nuptials as December 23, 1903 and place – Calgary.  I found the young family in the 1911 census for Edmonton where they were residing with Hugh’s uncles and Aunt – Neil, Hector and Catherine McLean.  In addition to this, there are several other clues – Hugh was born in Ontario, there is a Mary Newton listed as a sister to the head of household, there are two cousins living there – William McLellan (75y) and James McLean (45y) as well as another nephew – George Sharp (27y), all born in Ontario and, the McLean’s were all born in Scotland in the 1850’s.

And, I already had more information on Mary McLean’s siblings and tapped into my private tree for more information.  The siblings were all children of James McLean and Mary McEachern – born in Barr, in the Bowmore parish of Islay, in Argyll Scotland.  The family is found there in the 1851 and 1861 census’.  They apparently emigrated to Erin, Wellington some time over the decade and are then enumerated in Ontario on the 1871 census.  Also listed on the same page of this census are other McLean’s – the family of Archibald and Margaret, a widowed Hugh McLean and an very old Hector McLean who is listed as being 104 years old at the time the census was taken. 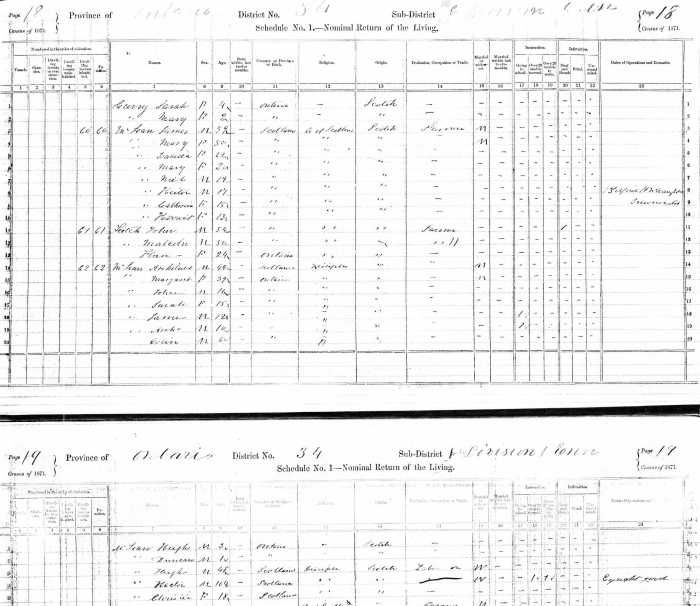 It is quite difficult to believe that Hector McLean could have been that old but it seems it may have been (close to) true.  He died in December of 1872 in Erin, Wellington at the age of 106 years old.

I found baptisms for James, Hugh and Archibald McLean who are listed on the 1871 census, that match their ages fairly closely.  James was baptized on July 12, 1813 in Kellpolsmore, Kilmeny parish, Islay to parents Hector McLean and Bell Gillies.  Brother Hugh was baptized on September 27, 1823 and then Archibald on August 27, 1826, amongst other siblings.

Based on the information gleaned from these documents, I was able to trace Mary McLean from Scotland to Erin to Edmonton.  She was found on the 1906 census for Edmonton, married to a George Newton.  Son Hugh and wife are residing with them at this time.  She passed away in 1926 in Edmonton and was buried in the Beechmont Cemetery in Edmonton.

But, who is Hugh McTavish Senior?  I cannot find him anywhere, he is like a ghost!

I went online at the Alberta Archives and I looked up Hugh Robert’s death and ordered the registration.  The registration confirmed his parent’s names and also added a birthdate and birth location of Ospring in Erin Township.  That puts him in the same area as Mary McLean at their marriage and should allow for a thorough search of the census’ there from 1852 through 1871.  I am also aware of two McTavish families in that village at that time – those of Dugald McTavish and his wife Catherine Buchanan (of which the DNA match’s match is descended) and also John McTavish and wife Catherine McArthur’s children.  Now, both of those families did have son’s named Hugh but they both have been accounted for so, there is another Hugh somewhere!

My searches have not yielded anything helpful to date.  No marriage registration has been found, no baptism for Hugh Sr. and no death record for Hugh Sr. (he must have died between their arrival in Namao in 1895 and Mary’s re-marriage some time before 1906).  I have combed the death indexes in Alberta for a Hugh McTavish who died between 1895 and 1906 to no avail, he just isn’t listed as having died there.  And, more perplexing is the lack of any census record for him – even searching the Anglicized Thomson name, a given name of William, which is sometimes used in place of Hugh or a broadened age range.  I reviewed the 1871 census page by page, looking for a Hugh or William McTavish or Thomson and there were none of any age.

One interesting item that I did find was a marriage registration for Peter McTavish (son of John and Catherine McArthur) and Sarah McLean (daughter of Neil McLean) dated September 19, 1854.  Both are residents of Erin and witnesses included Archibald McLean and a William McTavish.  One assumes with the same last name, that a witness is a relative of some sort.  I have no record of a William being a part of this family  – perhaps he is the elusive Hugh Sr.?  Also, I have been able to place nephew George Sharp from the 1911 census – he is the son of a McLean sister – Elizabeth who was married to John Sharp and who stayed in the Erin area.  The reference to “cousin” William McLellan could prove interesting – there were a few McLellan’s in the Erin area during the late 1800’s but I haven’t (yet) been able to attach him to a family and establish the connection.  My plan is to keep moving sideways within families to potentially illuminate the proper parents, if only by a process of elimination!

This sideways process is now taking me into Grey County and the village of Priceville.  Stay tuned!