It is often difficult to navigate a family tree with ease. Between lost records, naming patterns and movement to new locations, it can be a challenge to decipher each of the lines. It can become an even more difficult task when families inter-marry, sometimes even cousins married each other. I have found this to be both frustrating and rewarding as I try to untangle the various branches of my tree.

One of these tricky research challenges was found close to home – in Halton County. As I have mentioned before, a few members of my McTavish family emigrated to Nassagaweya Township in Halton County in 1830. One of these was Catherine McTavish (1807-1861) who had been married to John McAlpine (1801-1889) in the Glassary parish of Argyll on the 26th of December 1829, just a few months prior to leaving for Canada.

Catherine has been proven through DNA to have been a sister to my 3x great grandfather Duncan McTavish as well as to Archibald, Dugald and Margaret McTavish Gillies.

After having researched many of my Highland Scots ancestors, I have learned that most did not come to a new land alone. There was simply too much work to be done, and in very primitive areas with limited resources. So, they tended to move in groups of family and friends and as a collective, could support each other through the tough early days. Often too, these groups were encouraged to join other family members who would have emigrated earlier. I can only surmise that my McTavish’s, were encouraged by others to join them in Nassagaweya. I do know that Dugald McNair was one such provoceur, and believe also that Andrew McAlpine was another.

Research has shown that Andrew McAlpine was the brother of John McAlpine. In the Early History of Nassagaweya, Joshua Norrish wrote “Andrew McAlpine came from Ballamore, Argyleshire, Scotland, in 1828, and settled on the west-half of lot 22, in the 6th concession. In 1831 his father Donald McAlpine, and two brothers, John and Alexander, and two sisters came, and a few days after coming Andrew took sick with a sort of typhoid or ship fever…the man died leaving a wife and three sons.”

Records at Scotland’s People show that Andrew was baptized on 5 Jun 1803 in Ballimore, Argyll to parents Donald McAlpine and Elisabeth Brown. He would marry Euphem McGilp on 9 Mar 1824 in Glassary, Argyll, Scotland. The couple would baptize two children (Donald in 1825 and Mary in 1826) there before departing for Canada.

Joshua Norrish also mentions that John McAlpine took up the west-half of lot 28 in the 4th concession. He and his wife Catherine would have seven children before Catherine would pass away in 1861. The family is buried in the Ebenezer Church yard in Nassagaweya, not far from the family farm. John would serve as an elder in the Church for many years.

Upon Andrew’s death, his widow Effy would marry Angus McKenzie. Angus was reputed to have been involved with William Lyon McKenzie and the rebellion in 1837. He may have fled the country as a result of his actions. Other than a record of their marriage, I cannot find him again. Euphemia died in Marlette, Michigan in 1875 – at that time, she was a widow.

Registers of Marriage performed by the Reverend James Black – 1834

John McAlpine (1828-1893), a son of Andrew and Effy, would marry Ann McTavish (1825-1900), a daughter of John McTavish and Mary Darling of Esquesing Township. I do not know how this McTavish line may or may not tie into the others but certainly, several McTavish families in the same area, at the same time, is likely more than coincidence. John and Ann would marry some time around 1850, they would have four children before moving the family down to Marlette, Michigan. The family is found there in the 1860 and 1870 census. Between 1860 and 1870, they would have four more children. In the 1880 census, the family has moved further South, presumably for new land opportunities and can be found in Jewell, Kansas. 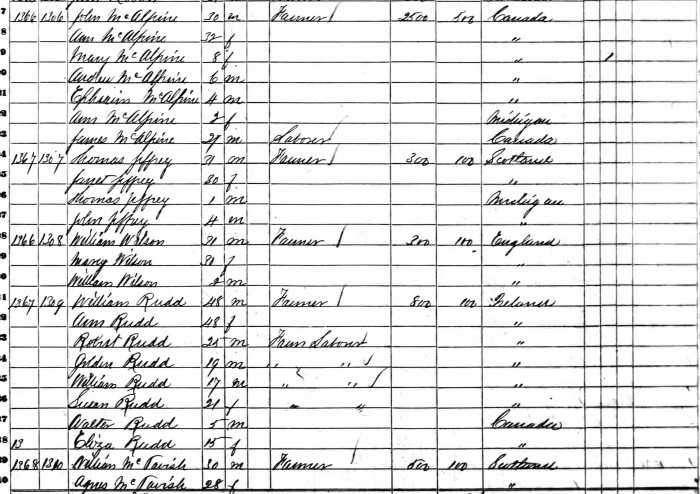 His brother, Andrew McAlpine (1831-1889) would marry Catherine McTavish (1837-1906) in November 1855. She was the daughter of Archibald McTavish (1783-1863) and Catherine McNair (1791-?); Catherine McNair being the sister of Dugald McNair. Andrew and Catherine also moved to Michigan, settling in Lapeer about 1858. They are found in the 1860 census, with their first two children and then in the 1870, 1880 and 1900 census’ around the same areas of Lapeer and Sanilac Michigan. They would have six children and many are buried together at the Siple Cemetery in Tuscola County, Michigan.

Catherine McTavish’s brother, Angus (1832-1888) married Mary Jane McKenzie (1835-1912), the eldest daughter of Angus McKenzie and Effy McGilp McAlpine, the half sister of Andrew and John McAlpine. They married one day before Andrew and Catherine in November 1855. They too would move into the US, residing in Sanilac, Michigan and raising nine children together. Interesting on this census too, Angus’ brother William is listed as single and living with the family. Mary Jane McKenzie McTavish died in Saginaw, Michigan in 1912 and on her death registration, we see her parents named. 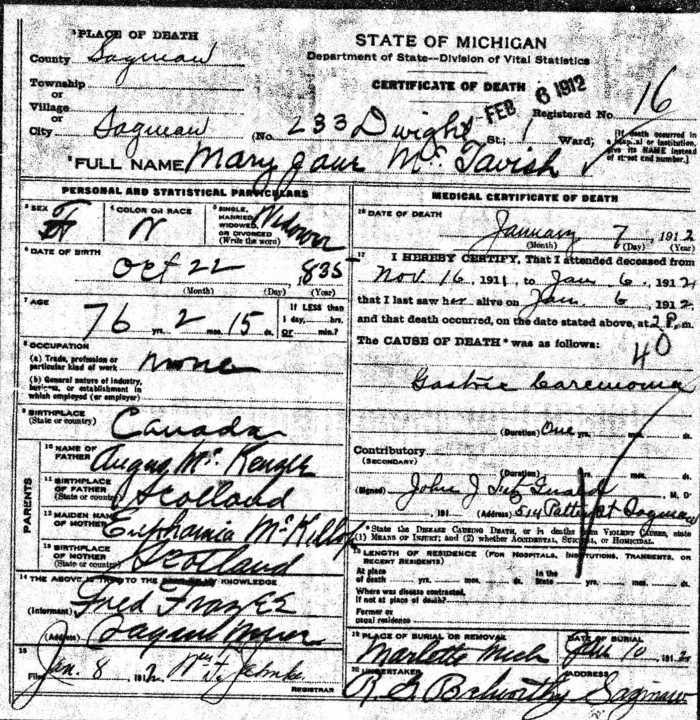 Angus’ brother William, who is listed in the 1880 census as single and a carpenter, was born in Scotland. His full name was William Sharp McTavish and some additional sleuthing was required to find him. I found a death for him in Marlette, Michigan dated January 20th, 1904. It lists his birthdate as January 12th, 1814 in Scotland and his parents are listed as Archibald McTavish and Mary Henderson. On the 1860 census, he claims to be 30 years old and on the 1880 census, his birth year is noted at 1825. So, there was a range to check at Scotland’s People. I found a Baptism for William Sharp McTavish on the 6th of January 1824 in Glasgow to parents Archibald McTavish, a taylor and Christian Henderson. All clues point to this being the right one, just a mistake in the registration of his death, overstating his age by 10 years. The informant was his sister-in-law Mary Jane.

William’s information links him to his father Archibald McTavish, whom we know was a tailor and who had married Catherine McNair in Kilmartin, Scotland in 1827. So William’s mother Mary or Christian Henderson must have died at some point between 1824 and 1827 and Archibald must have travelled back to Argyll during that same time. I could find no marriage for Archibald McTavish or Thomson to any Henderson or McKendrick (gaelic verson). I did however, find a baptism for Mary Thomson, born to Archibald Thomson, a taylor) and Christian Henderson, in Glasgow on May 18th 1822.

Mary (1822-1887) would emigrate with the family in 1830 and settle in Nassagaweya. She is listed on the Canada Steamboat lists as well as the 1842 census. She married Hugh McNair ((1822-1890) some time in the mid 1840’s, no marriage record has been found but their first child was born in 1847. The family lived in Erin Township in 1861 and removed to Kincardine before 1871 where they lived out their days. Hugh was the son of Dugald McNair and Kitty Black who emigrated from Kilmartin in 1819, settling first in Elgin County before moving to Nassagaweya in about 1825. Dugald was the brother of Catherine McNair McTavish. While it seems that Hugh McNair and Mary McTavish were cousin, they were actually not blood related as her mother was Archibald McTavish’s first wife, Christian Henderson.

While untangling any knot is a challenge, it is also very rewarding when you do it. It’s important that when you do untangle a branch, that you keep it separate so you can see where it all ties together, in order to keep it on its own.