Skip to content
HomeHey William Napper, I think we are related!

A few months ago, I was contacted by a reader who told me that she had seen a marriage record for my fourth great-grandmother Alicia Colden Napier. I, along with others, have written about her before, trying to detail out her life without a lot of source information. I was kindly instructed to use Family Search with her name of Alicia Napier and a birth between 1790 and 1800. I did so and up popped a marriage index for Ireland in 1818. Listed in the Lismore parish of County Waterford, John Husband married Alice Napper.

FamilySearch – Marriage Index – Waterford and Lismore, Ireland.  Accessed via search of Ireland records for Alicia Napier born between 1790 and 1800.

What I found is just an index, but the timing, location and names are all within the realm of correctness. And, I am hoping that with this index, I can source out the actual document, which may have more information. If course, I will need to patiently wait for things to open up again during these pandemic times. But, this hasn’t stopped me from un-ravelling this lead to see if there are any other clues that can be gained.

The index is listed alphabetically, so on the same page, I can see three other marriages for the surname Napper and one marriage for the surname Napier. These five marriages are between the years of 1796 and 1830, in the parish of Lismore. I then searched for John Husband in Family Search using his information and found not only the H page for Lismore but a bunch more Husband marriages in Cashel & Emly in County Tipperary. So, an interesting new find that illustrates how refining your search parameters and using multiple tools, can often yield better results.

After sharing this find with others who are interested in this family, I was struck by a niggly feeling that I had seen the Napper name somewhere else in my research.

This Husband family had emigrated to Nassagaweya Township in Halton County Ontario the year 1822. John had petitioned the government for a land grant owing to him from his service in the British Navy from 1812-1816. His letter of petition stated that they had come from Tipperary, Ireland. In 1833, he was granted the patent for 100 acres on the South-west half of lot 25 in the 4th concession of Nassagaweya Township. In the 1842 census for Nassagaweya, John Husband is listed with his family on the West half of lot 25 in the 4th concession, he is listed as the 31st person in the census. I had recently been researching to see if I could find John’s cousin, John Simpson, who had been an executor of John’s will and also a resident of Nassagaweya. I was looking at the 1842 census and low and behold, there is a William Napper listed and, he is on the lot directly beside John Husband’s lot. William is on the 1842 census residing on the West half of lot 26 in the fourth concession. Of course, I was intrigued to say the least. Coincidence, maybe but more research on William Napper was needed to figure that out.

In the 1842 census, William Napper is listed as a shoemaker. He is married and between the aged of 30 and 60 years. His wife is between the age of 14 and 45, he has a boy and girl under the age of five, and a boy and two girls between the ages of five and 14. One member of the household was born in Ireland, one in Continental Europe and five in Canada. The family has been in Canada for 19 years (meaning arrival about 1823). 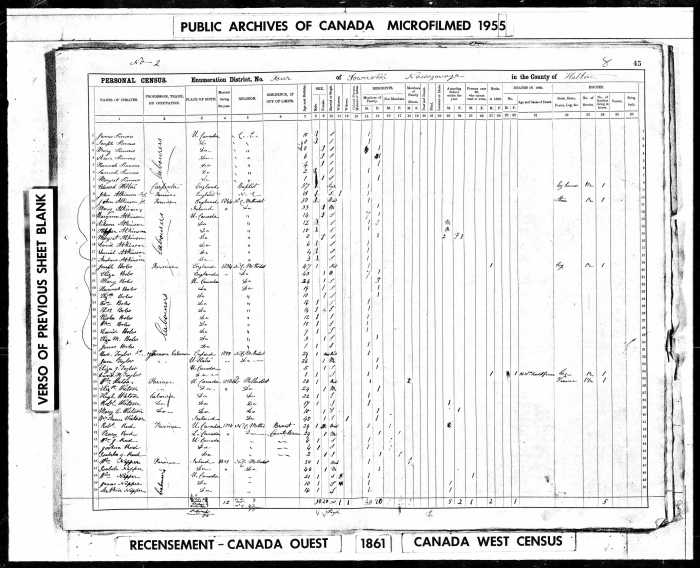 Since the 1851 census is missing for Nassagaweya, the next census to review is the 1861 census. William and his family are listed again in Nassagaweya Township. In this census, he is listed as 50 years of age, born in Ireland, a farmer and married in 1831. His wife is named Isabela, she is 46 years old and was also born in Ireland. There are six children listed, all born in Upper Canada including William (21y), James (18y), Arthur (16y), Charley (13y), Harriet (10y) and Robert (7y). Since 20 years has passed between census’ and five of these six children are younger than 20, we know that there are four older children no longer living with the family. 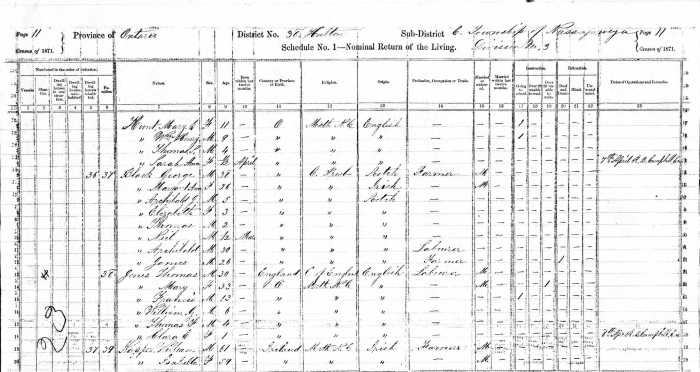 By 1881, William Napper is no longer residing in Nassagaweya as he is not listed in the Township. Isabella Napper (aged 67y) is a widow listed in Eramosa Township, Wellington County (adjacent to Nassagaweya) living with her son William, aged 45y.

William died on the 16th of April in 1873. His death registration is signed by his wife Issabelle and states that he was born in Tipperary, Ireland about 1811.

His headstone is in the Ebenezer Church Cemetery, in Nassagaweya.

So, now we have another connection to John Husband and Alicia Napier, his wife. There are two “coincidences” that suggest a potential tie between the Husband’s and the Napper’s, although nothing to connect them solidly. John married Alice Napper in 1818 in County Waterford, Ireland. They emigrated to Canada in about 1823, were residing in Nassagaweya by 1833 when he received his land grant. They came from Tipperary, Ireland. William Napper also came to Canada in about 1823, was in Nassagaweya on the lot directly beside John Husband by 1842. He was also from Tipperary, Ireland.

In the land records, I have found that William Napper received the patent for part of lot 25 in the third concession, Nassagaweya in 1856. No corresponding request was found online when I searched the Library and Archives Canada site. In the land records, I have noted that William had a will that was probated (instrument # 706E) in 1873. As soon as the Archives open again, I will go and get a copy. I am interested to who his executors were for his will. Patience!

I also followed many of his children to see what information I might get from each of them. I have not found and reference to the Husband family as of yet.

I turned then to look at DNA, to see if I could find anything new there. I have many documented cousins on the Husband side. Some matches go as far back as John Husband’s parents George Husband and Elizabeth White. I have not yet been able to find and matches to any Napier descendants, other than the ones who share the Husband line. This has always seemed strange to me – when I can find no matches, I know that something is off. So, on a lark, I searched out anyone in my DNA matches that had “Napper” in their trees. Surprisingly there were quite a few. Some used the name Napper and Napier inter-changeably but there were others that did not have Husband or Napier but had Napper and they matched my father’s DNA. I found quite a few matches to Nappers from Tipperary who had emigrated to Quebec. Several of the trees go back to a John Napper (b. 1776 Cahir, Tipperary – d. 1858 Hemmingford, Quebec) who was married to Mary Bowles (1784-1877). Some trees have William Napper listed as their son, but no documentation to prove it). The John Napper listed had several siblings who also emigrated to Quebec including Jane Napper (b. 1785 and married to Richard Williams) and Margaret Napper (b. 1789 and married to Simon Spearman). In terms of the size of the matches, they range from 7cM up to 30cM so fourth cousins at least. But this makes sense – Alicia Napier/Alice Napper is my father’s third great-grandmother. I have matches through William Napper’s daughter Mary Jane (m. Robert Reed) and son Robert, as well as John Napper’s sons Robert and John. And, when I look at our shared matches, I find many known Husband cousins.

So, my conclusion is that I may in fact be a Napper and not a Napier. It appears that William Napper of Tipperary, Ireland is related somehow to Alicia Napier Husband. Just what that relationship is, remains to be seen. More genetic genealogy detective work is required, and I have the time to do it!

2 thoughts on “Hey William Napper, I think we are related!”